Fallout 76 is one of Bethesda’s most anticipated games, and now we have a more in-depth look at the game. During Bethesda’s E3 2018 press conference, the studio shared more details about the latest Fallout, which is said to be four times larger than Fallout 4, and revealed new gameplay trailers along with a presentation from game director Todd Howard. Check it out in the video above.

Howard led the presentation which showcased the landscape of West Virginia, but also how it functions as a game that is entirely playable online. It’s both a four-player cooperative and PvP experience, but Fallout 76 can still be played as a single-player game.

This is actually the second trailer for Fallout 76 revealed today. Earlier in the day, Todd Howard appeared on stage during Microsoft’s E3 2018 press conference to show off the game for the first time ever.

Fallout 76 is about rebuilding, and all the people who emerge from the Vault will be responsible for forging a new beginning. You’ll be able to play Fallout 76 this year since it launches on November 14, 2018 for PlayStation 4, Xbox One, and PC. Pre-orders for the game will begin on June 15 and a beta is coming sometime soon. 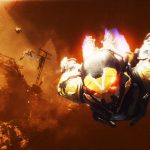