The upcoming Halo TV show produced by Steven Spielberg was originally going to be directed by Rise of the Planet of the Apes director Rupert Wyatt. However, at the end of 2018 he dropped out due to scheduling issues, with Black Mirror director Otto Bathurst taking over. Now, Wyatt has shared even more insight into his exit from the show.

Speaking to Collider, Wyatt said he had to leave the Halo TV show because changes to the production schedule conflicted with his other commitments. He said that in his role as a director, he wasn’t with the project from day one, and as such, he wasn’t in control of the factors that ultimately led to the production becoming extended. Had he been the showrunner, he said he might have been able to stay aboard, he said.

However, with the decision to extend the production by “months if not years,” Wyatt had to step away to do other things. Overall, the version of the Halo TV show that exists today “wasn’t within the framework” for what Wyatt originally signed up for.

The Halo TV show’s showrunner–that is, the person or team who controls the creative direction of a show–is Kyle Killen who previously worked on Awake.

The Halo TV show will air on Showtime, whose parent company, CBS, also owns GameSpot. The last we heard from network president of programming Gary Levine was that the Halo show is “evolving beautifully with rich characters, compelling stories, and powerful scripts.” Showtime said previously that Halo is the network’s “most ambitious series ever,” and that’s notable given Showtime is behind some massive productions such as Homeland, Shameless, Billions, and more recently the Jim Carrey show Kidding.

Master Chief will feature in the Halo TV show in some capacity, but it remains to be seen if he is the lead, or what other characters might join him. The show is scheduled to begin production later in 2019, and Showtime has ordered 10 hour-long episodes of Halo for its first season. 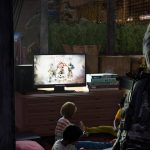