From grim and gritty to bright and fun, 2019 delivered for capes and cowls.

Ah, superheroes. The gift that keeps on giving. Sure, the MCU may have drawn the curtains on Phase 3 with the release of Avengers: Endgame this year, but that doesn’t mean the superhero movie and TV bubble is showing any signs of popping just yet. In fact, it only seems to be getting stronger with more and more comic book stories being adapted by different studios and networks in increasingly creative ways.

2019 saw the release of HBO’s Watchmen, our 2019 show of the year, alongside other slightly-off-beat favorites like Netflix’s Umbrella Academy, Amazon’s The Boys and the final season of FX’s Legion. Add to that mix animated favorites like My Hero Academia, all-ages treats like Shazam, and quirky action-comedies like Doom Patrol, and you’ve got yourself the recipe for a really strong year for capes and cowls.

Which superhero movies and TV shows were your favorites in 2019?

When HBO announced a Watchmen TV show, the reaction was justifiably skeptical. It’s one of the most famous graphic novels in the world in addition to being co-created by one of comics’ most infamously anti-adaptation writers, Alan Moore. We’d already had a live-action movie hit theaters back in 2009 to some extremely polarized reactions from fans and critics alike. So you can absolutely imagine our surprise when, after just one episode, the Watchmen TV show managed to win us over. From top to bottom, Watchmen felt like a breath of fresh air for event TV, providing all sorts of fascinating ways for viewers to play along from digital “backmatter” in the Peteypedia to wild speculation with fellow fans about the show’s biggest and most mind-bending mysteries. It never sought to fully emulate the source material, but to update and adopt it for a new generation, layering world-building and concepts that originated back in 1985 with modern-day sensibilities to create a playground for the insanely stacked cast to tackle some truly impactful issues that are anything but flashy sci-fi superhero fluff. And to top things off, Watchmen pulled it all off like a nine-episode magic trick, delivering a complete story that welcomes continued conversation but doesn’t leave anyone or anything feel left in the lurch. If this is the future of the superhero genre on TV, it couldn’t be brighter. — Meg Downey

Even by superhero comic standards, the Umbrella Academy books are eccentric, to put it lightly. They don’t seem like a likely candidate for a successful adaptation to any other medium, much less live-action, given just how surreal things eventually get, from a man with his head sewn onto a giant ape body to a time-traveling adult that looks like a child “married” to a department store mannequin. But somehow, against all odds, Netflix managed to thread the needle and pull it off. Umbrella Academy the TV show wasn’t afraid to play things a little fast and loose with the source material, a gambit that could have had disastrous consequences but instead only served to elevate and update the story into a modern context. That, coupled with a stellar cast, appropriately whimsical art direction, and a grounding emotional core, managed to make Umbrella Academy one of our favorite superhero shows of the year–and one of 2019’s very best adaptations across all genres. – Meg Downey

In the crowded annals of superhero television, Legion stood taller than most. Less cape-and-cowl crusading and more art-house experiment, the FX original series by Noah Hawley (Fargo) ended with a psychedelic, timey-wimey, insanely ambitious, and deeply cathartic bang. Season 3 proved to be one last unapologetically unhinged romp through the mind of David Haller (Dan Stevens), a mentally disturbed mutant telepath who threatened to destroy the world–whether he intended to or not. As the fabric of reality began to fray, a stellar cast including Rachel Keller, Aubrey Plaza, Jean Smart, Jemaine Clement, Navid Negahban, and more battled through time and musical numbers to prevent a toxic man with a god complex from letting himself off the hook. It was one of a kind. – Meg Downey

Admittedly, the character Harley Quinn, the character, is not my cup of tea, but her animated series on DC Universe was one of my favorite shows of the year–and it’s still airing weekly on the streaming service. Imagine The Venture Brothers but more grotesque and no censors for the cursing, and that’s the show. Harley Quinn is a ridiculous, yet hilarious, series about the titular character moving on from Joker to become a solo supervillain–why does this plot sound familiar? Harley Quinn captures the absurdity of superhero comics and stories and pokes fun at it while telling a great story and not punching down at the audience. – Mat Elfring

Amazon’s first season of The Boys pulled back on the adult content from the comic book series it was adapted from, believe it or not, and focused more on the main story of people trying to take down corrupt superheroes. The core, the heart, and the characters are still there, but Amazon’s take is much more focused on story rather than trying to go over-the-top with ridiculous moments (although those moments still exist). The Boys is a fresh take on the superhero genre, as those with powers are seen as the enemy by the protagonists. That’s a tough thing to pull off considering the cinematic climate we live in, but the Amazon series does it exceptionally well, and it leaves the viewer wanting more. — Mat Elfring

In a grimdark world of DC Comics movies that take themselves incredibly seriously, Shazam is a ray of pure sunlight and joy. This is a movie about a kid who’s given superpowers, and it’s treated as such. While there’s a villain to battle and a world to save, what Shazam does so well is making you believe this tough superhero is actually just a kid. He uses his powers to buy beer, impress his friends, and take on bullies. This is, honestly, the lighthearted superhero fare we needed in a 2019 that saw the fallout from Thanos destroying half of the universe. More movies like Shazam, please. – Chris E. Hayner

Sure, DC Universe may be a streaming service you don’t have–and possibly have never heard of. But it’s also some to some of the best superhero fare on TV. Take Doom Patrol, for instance. Unlike the typical comic book fare, this show is about a group of lovable and often disturbing misfits and includes some truly bizarre concepts that are absurdly fun to explore. Whether it’s a farting donkey that is home to a pocket universe or a woman with multiple personalities–each of which has its own superpower–Doom Patrol is a truly unique experience. It’s ridiculous in the best way possible, while also managing to tell high-quality stories and exploring interesting characters. Watch it; you won’t be disappointed. – Chris E. Hayner

It’s not uncommon for something to be lost in the translation from manga to anime, especially with a series as fast-paced and bombastic as the ones found in the Shonen Jump magazine, yet somehow the My Hero Academia anime keeps pulling the transformation from page to screen off flawlessly. 2019 saw the anime enter its fourth season and there’s yet to be a dip in quality or faithfulness to the source material. – Meg Downey

Avengers: Endgame brought the long saga of the Marvel Cinematic Universe to an ending (not the end, but an ending nonetheless). The heroes we’ve come to know and love took on Thanos once and for all, irreparably destroying the series’ timeline in the process. Most of all, Avengers Endgame was a love letter to the entire MCU–the whole thing. It’s messy and confusing, and we spent weeks afterward debating whether the ending even made sense. But holy hell was it an emotional, fulfilling ride. It may not have completely worked, but in the aftermath, as the dust settled, Avengers Endgame felt like a much-deserved victory. – Mike Rougeau

The Punisher Season 2 was very much more of the same, as far as Frank Castle’s bloody hijinks go. Season 1, which released in 2017, left Frank in the wind, having maimed but not murdered his rival Billy Russo, and been cut loose by the powers that be. When we caught up with the Punisher in Season 2, he was sort of just drifting, staying in motels and hanging out in bars. It was very un-Punisher like; he even met a nice lady, although predictably, that didn’t last long. You see, the Punisher’s gotta Punish. It’s what he does. It’s too bad the Netflix corner of the MCU is dead, because all in all, it was ultimately pretty enjoyable. – Mike Rougeau

The Netflix Marvel shows went through their ups and downs, but now that they’re all canceled for good, at least they went out on a high note with Jessica Jones Season 3. This season was largely concerned with power as a concept–what individuals are willing to do to get it, what they do with it once they have it, and the effect it has on the lives of the people around them. That may sound like typical superhero fare, and in a way, it was–we’ve seen Season 3’s themes and narrative arcs many times before. But when this superhero comfort food is done well, it can resonate with viewers nonetheless. And that was the case with Jessica Jones Season 3. – Mike Rougeau

It was difficult to imagine a Joker without Batman, because the Jokers we’ve grown to love over the years all existed as chaotic evil counterpoints to Bruce Wayne’s unwavering lawful good. 2019’s Joker succeeded, without equivocation, because it transformed the villain into the populist antihero we need him to be now. Joker wears its influences on its maroon sleeves, but it also carves its own gashes through the blood-soaked landscape of contemporary comic book movies, offering something that, despite teetering on the shoulders of 80 years of history, was wonderfully fresh, dangerously exciting, undeniably entertaining, and rock-solid in its artistry. – Mike Rougeau 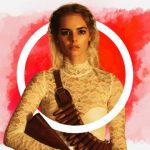