The Simpsons has done it again: the show accurately predicted the future, this time in relation to a big Game of Thrones Season 8 twist.

In Episode 5, “The Bells,” Daenerys torches King’s Landing with her dragon, Drogon; she destroys the city and kills its innocent civilians in a move that few saw coming amid her turn to becoming the Mad Queen.

As it turns out, the 2017 Simpsons episode, “The Serfsons,” also showed a dragon destroying a city with its fire-breathing skills. The episode was a spoof of sorts of Game of Thrones, and it even featured the voice of Jaime Lannister actor Nikolaj Coster-Waldau from Game of Thrones.

The Simpsons always find a way to predict these things. #GameOfThrones pic.twitter.com/plyDQl5U48

This is far from the first time The Simpsons has accurately predicted something. A Season 11 episode predicted Donald Trump would become president while a Season 10 episode stated that Disney would buy Fox. These seemingly strange things ended up happening in real life.

“The Bells” set a new ratings record for Game of Thrones with 18.4 million viewers. The episode was divisive, and for more, you can check out GameSpot’s review of Game of Thrones: “The Bells.”

For more on the latest episode of Game of Thrones, check out our look at 5 new Game of Thrones Season 8 theories from Episode 5, 15 Easter Eggs and references you might have missed, and the meaning of Dany’s dragon command. 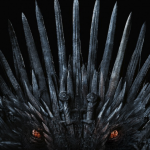