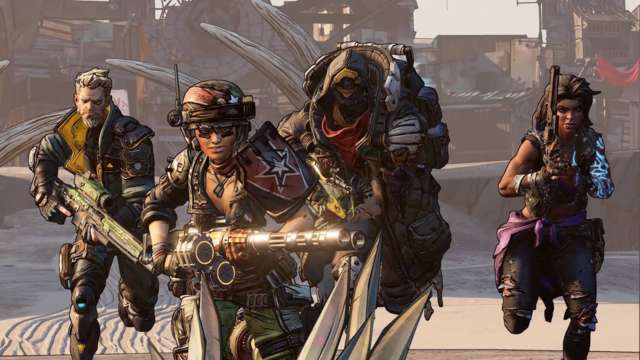 Borderlands 3 is a massive game filled with action-packed missions and numerous guns to collect. While relatively straightforward in its structure, there’s still plenty of concepts, mechanics, and systems that might go over your head. As you progress, it’s easy to miss the small things.

We’ve compiled a list of tips that should help out both series newcomers and returning players who may overlook some of the game’s more obtuse mechanics and features. Below you can find a list of the most useful advice and tips we have to offer after spending dozens of hours playing. Refer to the table of contents below to jump to where you want.

For more guides, be sure to check out our guide on which character you should choose before starting the game. Also, you can check out all the most ridiculous guns we’ve found so far. And for everything else, check out our roundup of all things Borderlands 3.

In our Borderlands 3 review, author Jordan Ramee gave the game an 8/10 and said, “Borderlands 3 has a few stumbling blocks when it comes to bosses, but these fights are overshadowed by the game’s rewarding gunplay and over-the-top humor. The game’s character-driven narrative acts as a satisfying finale for the loot-shooter franchise, and the new mechanics and features–especially the reworked skill trees and weapon manufacturer effects–give you plenty of agency in how you want to play through it. If you’ve never been a fan of the franchise, it’s unlikely Borderlands 3 does enough things differently to change your mind, as the game best excels at continuing what the series has always done: deliver a humorous tall tale of misfits looting and shooting their way to heroism.”

Got any tips you want to give about Borderlands 3? Furthermore, what other types of guides would you like to see? Let us know in the comments below.

Do The Marcus Side-Mission

After clearing the game’s introductory missions, you’ll be free to explore Pandora and take on other missions. From where Lillith is set up, run ahead to where Claptrap and a broken gun vending machine are. Interact with the broken machine to initiate a Marcus side mission called Powerful Connections where you help him fix it. Upon completing the task, you’ll open up his gun vending machine and gain access to better loot.

A Guide To Elemental Properties 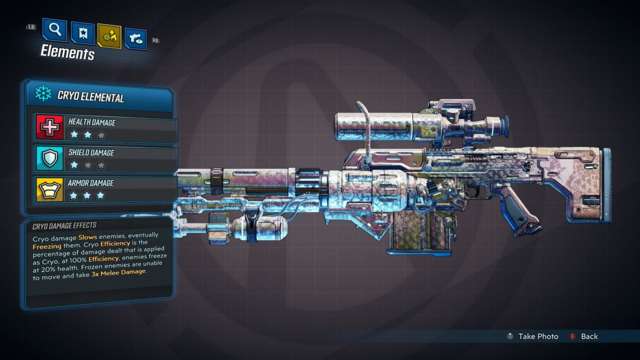 As you get your hands on more weapons, you’ll start to notice various elemental properties attached to them: Shock, Corrosive, Radiation, Incendiary, and Cryo. Each is effective in their ways and can even help you better take out specific enemy types. Below you can find a quick breakdown of the different elemental properties:

Invest In Shock Weapons After Chapter 1 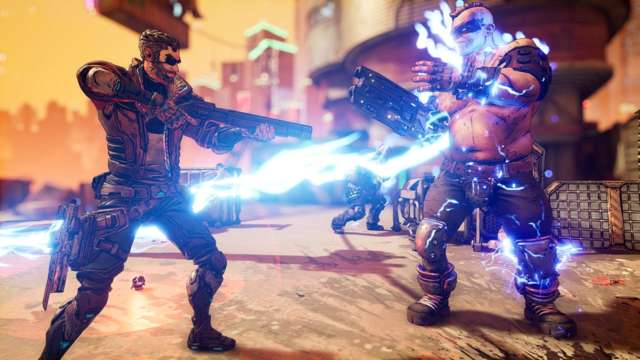 Make it a priority to get your hands on Shock weapons early on. While they aren’t of much use against the bandits in Pandora, they’re going to make your life easier once you reach Promethea in the next chapter where there are a ton of shielded enemies.

How To Upgrade Your Vehicles 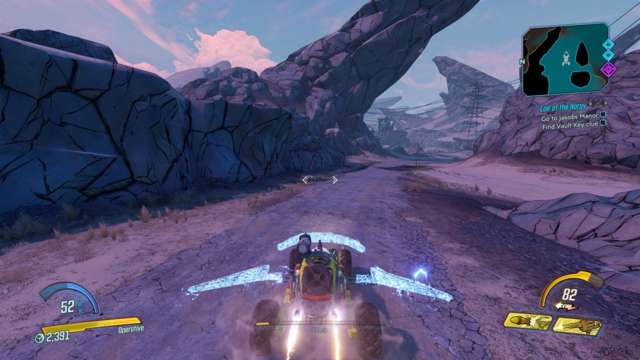 At first, it’s not entirely clear how to upgrade your vehicle, but the way to do so involves finding all the special cars parked around the various planets and driving them to your local Catch-A-Ride. They’re marked in blue on the map and are typically guarded by powerful enemies, so be sure to come prepared. Take the time to grab these vehicles, as their parts are pretty cool, such as the Laser Wings which extend literal laser wings from your vehicle that damage enemies whenever you boost. 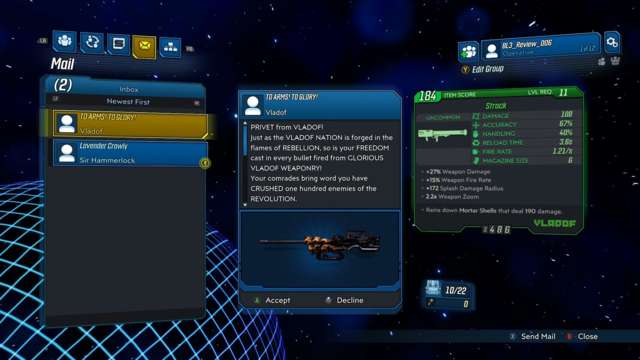 As you progress the story and complete new challenges, you’ll earn new guns. However, these aren’t given to you and instead are sent to the inbox tab in the social menu. Make it a habit to check your inbox for any newly acquired guns; you never know what new loot you might’ve received. But if you’re unhappy with the loot you’ve earned, you’re free to send them to your friends.

Do Not Tackle The Story Underleveled 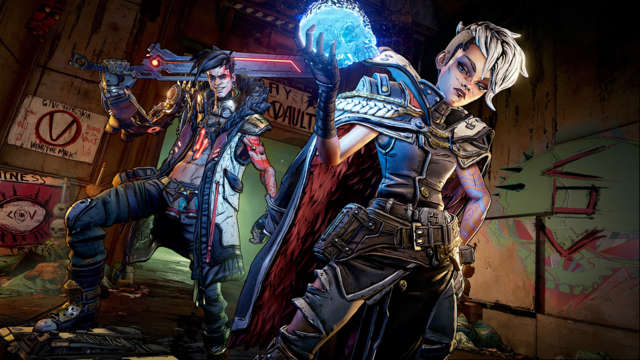 We cannot stress this enough: never tackle a story mission underleveled–even if you’re only under one level. Though it’s possible to do early on, you’ll quickly regret it with any mission you do after the first chapter. Borderlands 3 has perhaps the most challenging level check of any game in the series to date, so if you don’t meet the minimum requirement, you’re likely to struggle, especially against bosses. And if you’re on your own? Don’t even bother. It’s best to level doing other side missions first! 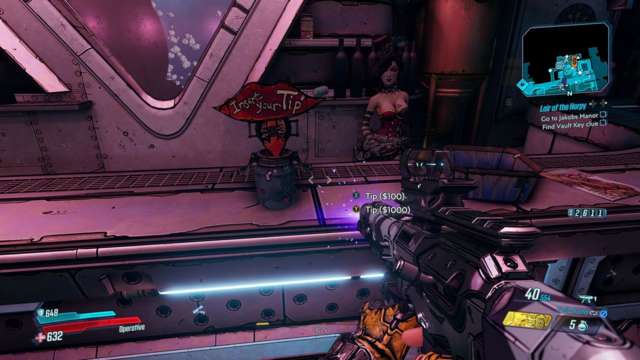 Moxxi’s Tip Jar returns, which means you can get some powerful loot–just as long as you’re a generous soul, of course. Go to Moxxi’s bar in Sanctuary and add money to the tip jar on the counter; you can tip either $100 or $1,000 at a time. At around $10,000 in contributions, you get a weapon trinket. You earn a new gun at $15,000; though the more money you pour in at that point, the better the gun Moxxi will gift you.

You Can Revisit Planets Anytime (and You Should) 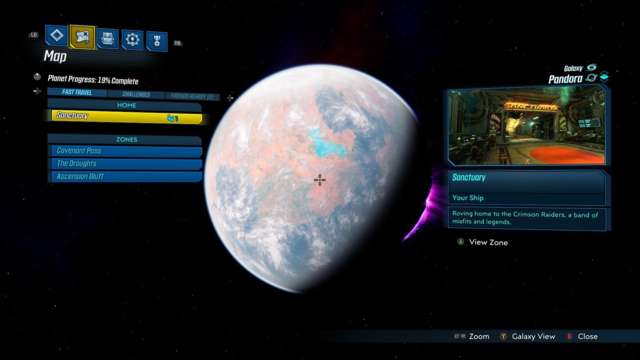 While you might be inclined to stick around where the story wants you to be, you should try visiting other planets on occasion. Not only are new side quests added to each planet upon completing specific campaign missions, but each planet offers a higher probability of finding certain guns. If the Maliwan gun you like using in your arsenal is beginning to fall behind in power, revisit Promethea and find a new one. Also, the game doesn’t inform you when new missions on other planets have been added so you’ll need to remember to revisit places every once in a while.

You’re going to pick up a ton of loot in Borderlands 3, and after a while, you’ll need to sell or discard all the stuff you don’t want. But when you open the inventory screen, your eyes will likely bleed because you don’t remember what’s good and what’s bad anymore. To avoid said exaggerated eye pain, use the tag feature in the inventory menu to label what’s worth keeping and what you can toss in the bin. Whatever you tag will remain highlighted even at a vendor’s sell screen for easy off-loading.

Carry a Variety of Weapon Types 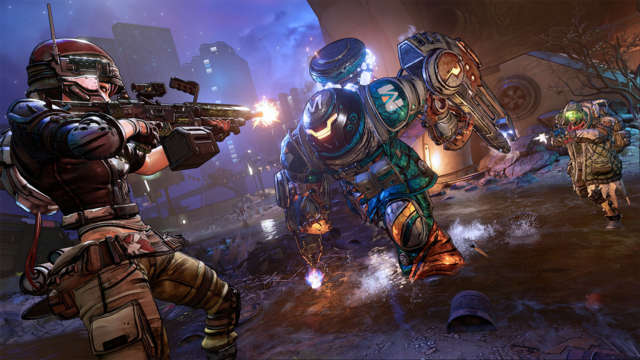 Make sure to carry a few other weapon types outside your main ones in case you run out of ammo. With how hectic firefights can get, it can be easy to run through your primary weapon ammo quickly, so be sure to have some backup guns.

You Can Respec at Any Time 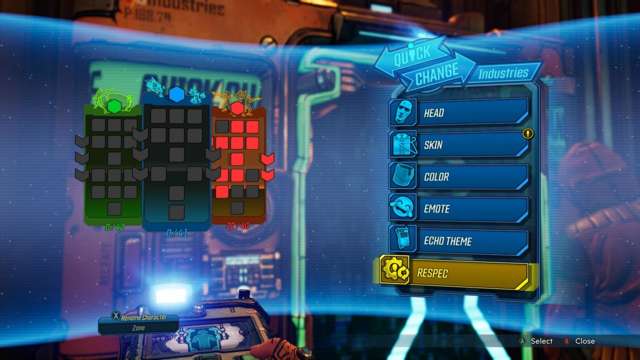 Are you unhappy with how you’ve specced your character and wish you could’ve done it differently? Don’t worry, you can respec your character anytime at any Quick-Change Station. It costs a sum, but what’s a few hundred dollars lost in the grand scheme of your happiness?

What’s Up With Those Eridium Chests? 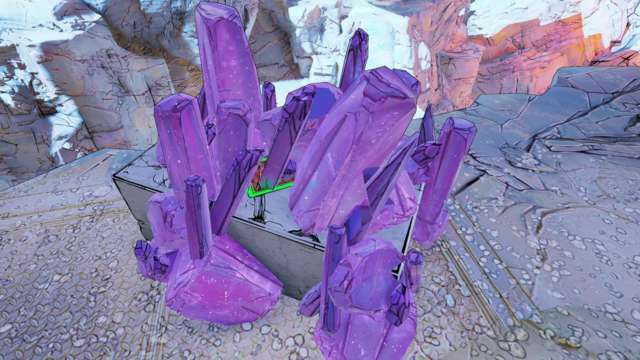 If you’re one to explore every nook and cranny, you’ll notice some locked chests early on that are covered in Eridium. You might drive yourself nuts trying to figure out how to unlock these chests, but don’t worry about them yet, progress further into the story. You will figure out how to open them in due time. Yes, that’s cryptic, but to discuss it would be too spoilery.

Since Borderlands 3 is a first-person shooter, you’re likely to prioritize shooting an enemy in the head. But don’t be so one-dimensional; you can be more strategic than that! Enemies react in different ways, depending on where you shoot them. Sure, headshots do the most damage and cause enemy heads to explode upon death, but arm shots can cause an enemy to drop their weapons, and legs shots can even make an enemy trip–which is incredibly useful against enemies that carry a shield. On the other hand, chest shots can stun an enemy and help you buy time to find cover. Be more methodical about where you shoot enemies; it just might save you in unexpected ways.

The Art Of The Ground Pound 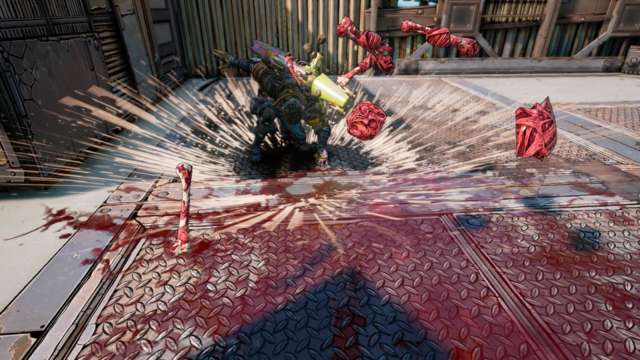 If you press the crouch button while jumping from a high ledge, you’ll perform a downward melee attack that crashes onto enemies below. Use this handy maneuver during an encounter to stun enemies and leave them vulnerable to whatever firepower you’ve got on hand. 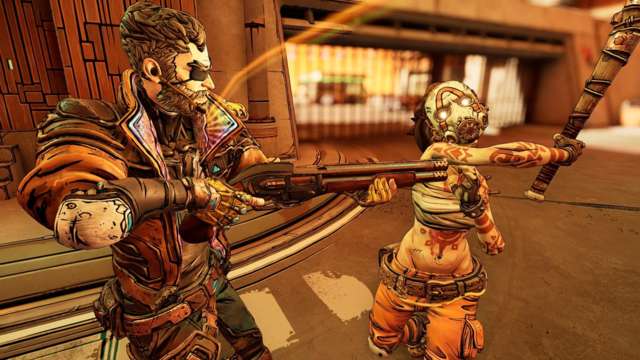 Don’t feel like you’re missing out if you’re not finding specific gun brands early on. Only certain firearms are popular on Pandora. Once you arrive in Promethea, the second planet, you’ll find a bunch of guns from the two corporations warring on that planet: Atlas and Maliwan. However, if it’s Jakobs guns you’re looking for, you’ll find a lot more on Eden-6, the fourth planet you’ll visit. 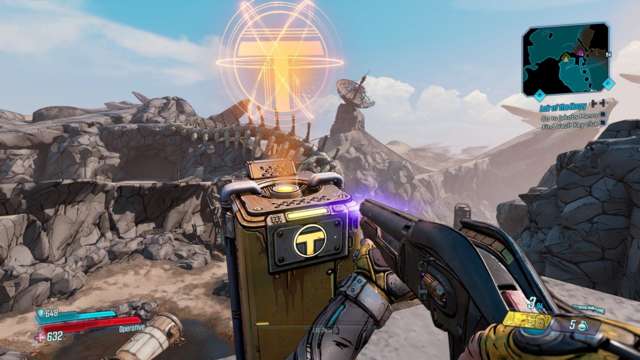 Go out of your way to find the Typhon de Leon audio recordings on every planet. The details you learn from them have ramifications on what you discover later in the story that is well worth knowing. 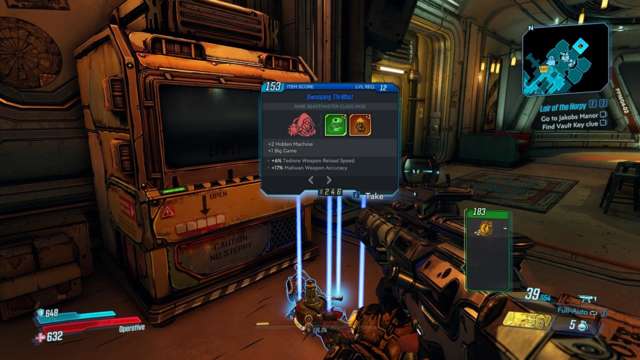 The Lost Loot Machine in Sanctuary will pick up an assortment of the best loot you’ve left behind in opened chests. It only picks up a handful of stuff, but it’s worth checking every once in a while after it becomes full.