Valve’s Steam Link hit its lowest retail price ever to go along with the Steam Summer Sale that kicked off today. It’s going for $15 on Steam itself–$35 off its normal price–up until July 5.

The device lets users stream games from their gaming PC to any other display as long their PC and Steam Link are connected to the same network. It’s essentially a bridge between a PC and television. Of course, it needs to be hooked up to a TV through HDMI.

Games can run up to 1080p (1920×1080) with 60 FPS through the Steam Link, but network speed will determine how smooth and sharp your games look. Valve recommends using a wired connected to get the best performance out of the device, though it will work wirelessly. Performance may vary with weaker connections, but it’s one of the more cost-effective methods of playing PC games in a living room environment.

The Steam Link also has three USB 2.0 ports, HDMI out, a 100 Mb/s Ethernet port, and Bluetooth 4.0 support. If you don’t want to use a keyboard and mouse, it’s compatible with Xbox One and 360 wired and wireless controllers, but you’ll need a USB dongle to get wireless controller working. Steam Controllers have native wireless support.

Be sure to check out a few anime-related deals and sales of big-name games we found on Steam.

How To Take Care and Maintain Your Hearing Aid 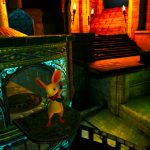